Okay, so I’m not actually listing reasons per se. I don’t really want to wage an attack on my personality or appearance, because that’s just not healthy or enjoyable. Instead, I’m sharing with you my favorite stories involving things I have said or done that may have something to do with my current relationship status. Some revolve around my failed attempts at flirting, some paint a picture of how blunt I can be when I’m not interested, and a few just paint a small picture of my bizarre personality. Here are the top 10 reasons I’m still single. 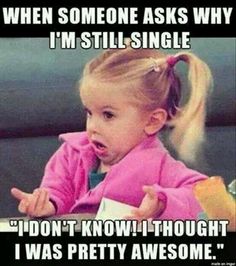 I was eating at a restaurant with my mom for my birthday, and we had a cute waiter that I was trying to flirt with. The key word there was trying. When we were done eating, my mom told him it was my birthday, and apparently that meant I got a giant chocolate chip cookie. He brought it over and asked if I wanted some plates, and my dumbass responded, “Plates are for amateurs.” I’m honestly surprised I didn’t follow it up with finger guns.

I was at a local bar, dancing with a group of girls, when a guy just randomly started dancing on me. I was just out to have a good time with my friends, and was definitely not in the mood to be hit on, if you can even call it that. After trying to move away from him a couple times, and having him continue to try to dance on me, I finally turned around to face him. This creepy ass looking guy that was probably about 10 years older than me had the audacity to sheepishly smile at me, and I noticed he was missing just about every other tooth. Me being who I am, looked him dead in the eyes and said “I’m sorry, you need to have all of your teeth to ride this ride.” 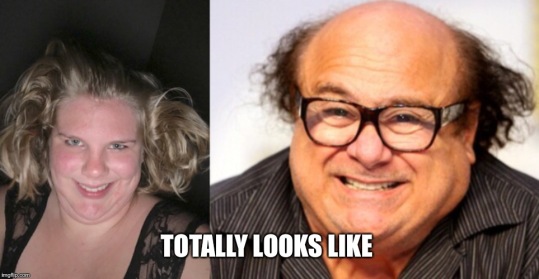 A little backstory on this- I was at work one night, and my coworkers were talking about celebrity doppelgängers. One of my coworkers asked me if I had one, and I responded as any normal person would, “Yeah, Danny DeVito.” When I got home, I took my hair out of my top knot and it was sticking out everywhere, and one thing led to another and this meme was born.

I was at a bar, and this time I was half hoping to meet a fella, when a very cute guy approached me. I knew he wasn’t a total creep, because he was friends with my twin brother. He did exactly what a guy should do, and came up to me and introduced himself. In my head, I was thinking, “Wow, this guy is really cute and actually seems like a semi-decent human being. I should respond with something cute and witty.” What came out of my mouth in the coldest tone that has ever happened in the history of the world was, “Congratulations.” Needless to say, that shipped sailed away very quickly.

This one is not quite a story, but more of an ongoing thing. While I try very hard to promote body positivity in my posts, I do admit that I have a pretty impressive (not sure if that’s the right word, but it’s what I’m going with) beer belly. I enjoy drinking beer quite often, however it does cause a less than attractive gut. I have a habit of sticking out my beer belly as far as I can, and holding it like a pregnant belly, usually in public. I keep telling people it’s going to be a Mich Ultra, or a Budlight, or whatever beer I happen to be drinking at the time. While it’s the opposite of attractive, I usually get a lot of laughs from it and find it hilarious. I will admit, that I should maybe stop doing it in public if I ever hope to change my relationship status.

I was at a local bar (why do so many of my stories start this way?) sitting a table with some buddies and playing dice. I got up to walk to the bathroom, and as I was crossing the dance-floor to get to my destination, a guy began to attempt to dance on me. I turned around and said “No thanks,” and kept walking. As I was on my way back to the table, the same guy, once again, tried the same routine. Now, a little backstory on me. I have a huge problem with men just coming up to me and starting to dance on me- not with me, but ON me. However, I’m not naïve enough to think this will never happen, and I therefore have a rule. When this occurs, I will ask nicely once and only once. After that, if he chooses not to respect my answer, all bets are off. So, when this guy, again started trying to dance on me while I was clearly walking away, I whipped around and told him, quite sternly, “I will end your f*****g life.”

I was out shopping at the mall, and it was obnoxiously busy for a Tuesday. I think it goes without saying that I am not what you’d call a “people person.” I do not like stores or malls that are loud and crowded, mainly because I suffer from social anxiety. On a Tuesday afternoon, one wouldn’t expect the mall to be so busy, but there we were. While buying whatever we were buying at a store, my mom commented to the cashier that it was overly busy for a week day and I agreed. The cashier (who was a moderately cute boy) looked at me and said, “You don’t like places when they’re busy?” My response? “I like my stores as empty as my soul.”

I was at a restaurant (seriously why do these always happen when I’m eating or drinking) and the T.V. had a rugby game on (my favorite sport) and the All Blacks were playing (my favorite team), so of course, I was invested in this game. The waiter (who was very cute) noticed that I was into the game. Here in the United States, not a whole lot of people know how rugby is played, let alone are invested into the game, so I knew this was probably a rarity for this guy. I suspected this when he said, “Oh! You know rugby?” I nodded, and he said “I learned all about rugby in a class I took in college.” I was attempting to be flirty and seem impressive, so I responded with, “That’s cute. I play it.” Now this might have worked had my tone matched my intent, however instead of sounding cute and coy, it sounded extremely condescending and detached. And another one bites the dust.

I was at a bar for my 21st birthday and was at a steady level of intoxication, as I had been drinking non-stop for the past three hours. My 21st birthday was on a Friday night, which also happened to be during the biggest drinking weekend of the year at my college, so pretty much everyone was out that night. I had gone all out with my hair and makeup and was wearing a sparkly, black sling dress, so I was feeling pretty confident. As I was stumbling my way through the bar to get another drink,  I ran into a guy I had been majorly crushing on for the past couple years (two years later, I’m still crushing). He told me Happy Birthday and pulled me into the best hug I had ever gotten before. In my drunken state, I did not realize I was saying the thought that crossed my mind out loud, where he could hear it. What was said thought? “Oh, it’s even better than I imagined.” Face, meet palm.

Make no mistake, I do not tell these stories because I am desperate for a relationship; I tell them because I think they are funny and say a lot about who I am. While I sometimes wish I was in a relationship to have someone to share that bond with, overall, I am very content being single. I’m at an age where I’m trying to figure out what direction I want my life to head, and I love being able to plan that solely around myself, without having to factor in another person. While there is absolutely nothing wrong with finding a forever love at a young age, I enjoy being able to focus solely on my career and MY life. I am very open to starting a relationship at this point in my life, but it is not something I am actively working towards because I am happy being on my own, for the most part. I tell these stories to show just how deep my single brain really goes; I’ve been single for so long, I don’t even know what I’d do if I wasn’t. More than anything, I hope these stories make people laugh, because being single is not the worst thing in the world. Whether you’re single or not doesn’t matter- all that matters is whether or not you’re happy. 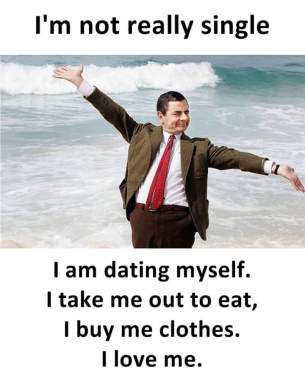