Today marks a very important day in my life; one year ago, I became a dog mom! Anyone who knows me at all knows that my dog is a huge part of my life and one of the things I value most in this world. Adopting Koda was one of the best decisions I’ve ever made and I have never regretted it. I wanted to use this post to talk about the adventure Koda and I have taken together in the past year. I also wanted to advocate for rescue dogs. A lot of people shy away from this because they aren’t usually pure breeds, they tend to be older, and you can never be sure what you will get, however I think that rescue dogs need loving homes the most. They need humans that are willing to be patient with them and work with them and love them unconditionally. This past year with Koda has come with a lot of struggles and frustrations, however those struggles were beyond worth it. Watching the progress he has made has been so fulfilling, and I cannot wait to see how much he continues to grow. Rescue dogs can be some of the most loyal and loving dogs I have ever interacted with, and rescue has become my favorite breed.

I don’t know a whole lot about Koda’s backstory, but here’s what I do know. Koda had been abandoned and left in a Walmart parking lot in Alabama. He had several scrapes and scratches all over his legs and was terrified of people. He was rescued by a shelter there and would just spin around in circles in a panic whenever someone approached him. The shelter that had rescued him was a kill shelter, and due to his age and behavior, no one wanted to adopt him, so he was meant to be euthanized. Thankfully, a shelter in Minnesota rescues dogs from kill shelters in the south. They brought him up here and named him Ice because of his blue eyes. He spent one week at a foster home while I was back at home, scanning a website for adoptable dogs. He happened to catch my eye, and after reading about his anxious personality and looking at the picture of his big blue eyes, I knew I had to apply to adopt him. I felt that an anxious dog would be perfect for me, as I also struggled with anxiety. I was approved to adopt him and set up a time with his foster mom to meet with him, but I knew then that I would be taking him home with me that day. I scoured through lists of dog names, and eventually decided on the name Koda.

When I finally met him for the first time, he sat several feet away from me and shook with terror. His eyes were wide with fear and he flinched whenever I reached out to pet him. After sitting with him for nearly an hour, we decided to try taking him for a walk. He did not want to leave the house and the further we got from it, the harder he tried to pull away and go back inside. His foster mom explained that he had been dehydrated and very overweight, and she had been working on getting him rehydrated and back to a healthy weight. At the end of our short walk, I was dead set on taking him back home with me. He laid down on the floor of my backseat, shook with fear, wouldn’t eat any treats, and didn’t move the entire drive.

When I finally got him home, he went into his new kennel and would not come out. He didn’t try to explore the house or come out to see me, my roommate, or her dog. He didn’t relax, even when he was eating his food. When he finally started coming out of his kennel a few days later, he wouldn’t leave a certain corner of the living room and was even afraid of laying on his bed. It took a week for him to approach me on his own, and he would nervously allow me to pet him for a few seconds before retreating back into his corner. 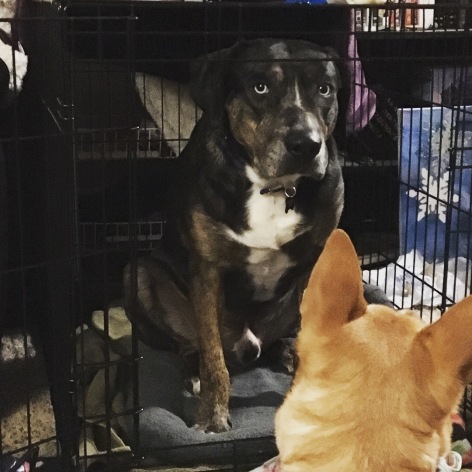 (Koda’s first night in his new home in the kennel he wouldn’t leave.)

As frustrating as the first few weeks with Koda were, I didn’t give up on him. Within that time, he began exploring my apartment and sleeping in my room with me. He was happy to see me when I got home, and soon started laying in my bed with me. Taking him for walks was extremely difficult at first, but he soon started to love them. He even started playing a little with my roommate’s dog.

(Koda, about six months after he was adopted, being all smiles.)

Now, a year later, Koda has made a lot of progress. He has learned how to play with other dogs (for the most part), and isn’t so scared of them. He loves to go on walks and play in the snow. He is so cuddly and is full of love. He gives Koda hugs, follows me everywhere, enjoys car rides, and absolutely LOVES belly scratches. He still gets nervous around unfamiliar people, but has found a few that he is comfortable around. He greets new people (after taking some time to himself to adjust) and will accept treats from just about anyone. He walks around the house like he owns it, tells me when he needs to go potty or when it’s time to eat, and has acquired a little bit of confidence. While he still gets very anxious around new people, still flinches when I pet him unexpectedly, and still gets scared of unfamiliar noises, I cannot believe how far he has come. Watching him change and grow has been one of the best parts of this past year. Helping him work through his anxiety has also helped me work through mine. He has also showed me how much power there is in love and kindness, even with dogs. Rescuing Koda was one of the best things I have ever done, but in a lot of ways, Koda has also rescued me. 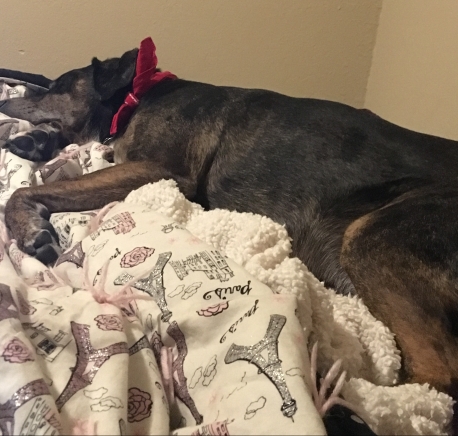 (Koda right now as I type this, laying in my bed, on my feet, and snoring.)

One thought on “My Rescue Dog”