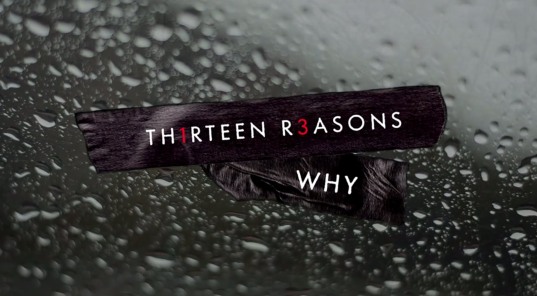 Many of us remember reading this book years ago, as it stuck with us over the years. It was the first time a book about a hard topic like suicide was in the spotlight, and those of us who read it never forgot it. Suicide has always been a hushed topic, but this book faced it head on. I never thought when I was reading it, I would be facing suicide later that year when my brother took his own life. Recently, that book has been made into a Netflix mini-series. Having binge watched all 13 episodes in 3 days, I can tell you that it sent me through an emotional rollercoaster and brought up a lot of old feelings I had buried years ago. It wasn’t easy to watch, but I’m glad I did. I have seen several articles from people talking about why watching this series is a bad idea. While I understand there is graphic content that is full of triggers, I feel that it is a show worth watching. Don’t get me wrong; if you think it will trigger a bad spell of depression or thoughts of suicide, take this post with a grain of salt. You know your own mind better than I do, but here’s why I think it is more than worth the watch for most.

As someone who has battled depression, I have never seen a more accurate representation of it than Hannah Baker. Media often portrays it as being sad all the time, staying up late crying- and it can be. But more often than not, it’s getting up every day and forcing yourself to smile and appear normal, but feeling empty inside. It’s not something that is easily recognized; it hides inside the person it infests. This is the first time I have ever seen depression accurately portrayed in all its entirety on the screen. Some may disagree, but that’s what my depression looked like to an outsider; like it didn’t exist. The show didn’t romanticize it as the TV world often does; it showed it for what it is, a disease.

The show also shows how much your words and actions have consequences. You know never know when something you do will start a chain reaction or what you say will push someone over the edge they have been desperately trying to back away from. Even the smallest thing can matter to someone. An example of this would be when my best friend told me she hated my laugh, and I never forgot it- it has made me self-conscious of my laugh even years after. Something so small and insignificant to her had a huge impact on me. It is time we teach each other to think before we speak and act, because we have power to hurt someone even when our words seem harmless. How different would Hannah’s fate have been if just one person hadn’t done or said whatever was mentioned on their tape? Anyone of them could have saved her, and it’s the same in the real world. One act of kindness can mean the world to someone.

It touches on how bad schools are at handling suicide. Hannah goes to her counselor for help, and he turns out to be utterly useless. This isn’t a far cry from what happens in schools across the country. When it comes to suicide, administrators do one of two things; they pretend it doesn’t exist or blow it out of proportion. The truth is that it happens and alerting the entire school doesn’t make it better. After my brother died, the school would not allow any kind of memorial because he didn’t die the right way. They didn’t want to encourage kids to commit suicide by making them believe they were glorifying it. This argument only makes sense to people who have never been affected by suicide. Did anyone say this when there was a memorial for the kid who ran a stop sign? No one said this would encourage students to run stop signs because the school was glorifying it. Many commit suicide because they feel invisible, and all this does is validate their feelings. Suicide exists. It’s time schools started recognizing that.

It forces us to think about suicide. Though it is the second leading cause of death in the United States, suicide is still swept under the rug. This show forces us to face it and address it as a real issue. It also helps raise awareness and shows the symptoms that go outside the stereotypical view. Talking about suicide doesn’t cause it; understanding it helps prevent it. Every time suicide is involved, it is shown as a shadow on a wall or a noise off camera. It is as brushed over as it is in the real world. Showing Hannah’s suicide as graphically as the show did has become quite the controversy, as did the violent rapes featured. Here’s the thing about those hard topics; they are graphic. Suicide isn’t heroic or peaceful; it’s painful and messy. Rape isn’t quiet and quick. It’s agonizing, terrifying, and stains you for the rest of your life. Life is graphic and disturbing and saddening and horrific. These topics should be hard to watch, because they are hard to live through. It shouldn’t be easy to watch these things happen, even if it is on a screen. It is time we face that instead of running from it. I’m glad they showed her suicide as graphic as they did, because that it how it looks in the real world. I am tired of it being swept under the rug, because in reality, it makes your stomach turn and your heart ache. I am tired of rape being romanticized rather than showing it for what it is; a violent crime. We need to stop sugarcoating these topics if we ever hope to put an end to them.

You can argue my points and refuse to watch the show, but one thing you can’t ignore is that this is the world we live in. People are raped daily, and many go unreported. People commit, attempt, or contemplate suicide every day. We need to open our eyes to these issues and stop pretending that they don’t exist. Hannah isn’t a hero because she killed herself, but she isn’t a villain either. She’s what every person who committed suicide and/or was raped- a victim. When we ignore shows like this or encourage people to avoid them, we are also encouraging victims of rape to stay quiet. We are encouraging people who are suicidal to be ashamed of their feelings. Stop softening up these topics, because they are not soft. They are hard and unforgiving. It’s time we start treating them as such.