Recently, I have been doing a lot of research on feminism in my spare time. What I found was disturbing, because I could not believe how many people, men and women alike, were against feminism or thought that we didn’t need it. Why? How on Earth could anyone possibly be against women equality? Why are so many people discrediting it to make it a man’s issue? The main argument I saw against it? “If women want equal rights, I should be able to hit a woman without consequence.” So, that’s where your concern lies? You want to be able to physically hurt someone without consequence? Why aren’t more people seeing the problem with this? Newsflash friends, THIS IS ALREADY HAPPENING! So here is my list of reasons as to why we need feminism:

Because we do not learn about great women in history in textbooks We don’t learn about the female scientists who made NASA’s first trip to space possible. So many people have never heard of Hedy Lamarr, and when you Google her, the first thing that comes up is about her acting career, and not her work on developing a radio guidance system for torpedoes in WWII. We only learn about Cleopatra’s romances with Julius Caesar and Mark Antony, but not about the work she did in Egypt. Because women are missing from our history books. 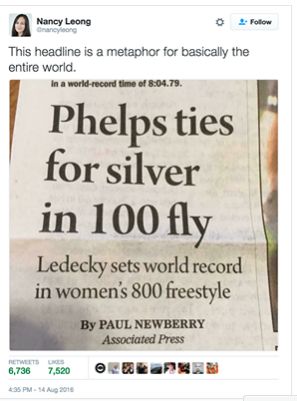 Because men don’t text each other that they got home safe As a woman, I often text my friends that I made it home when I’m walking there late at night. When my friends leave my apartment, I make sure they let me know they made it home. My girl friends tell me to text them when I get back, but my guy friends don’t, because girls understand the risks of walking home alone at night.

Because women are blamed when they are raped, and are taught how to change their behaviors to avoid it. Because they are expected to apologize to their boyfriends when they are raped. Because young men who rape women are given lighter sentences so that “their lives are not ruined,” even though he ruined a woman’s life when he raped her. Because often times when girls are raped, the first thing they are asked is “What were you wearing?” Because no one is expected to be ashamed if their house is broken into, but everyone is expected to be ashamed of being raped. Because rape is the only crime in which men are able to defend themselves by saying they couldn’t resist. Because women live off a rape schedule without even realizing it, when they do things to protect themselves like pretending to be on the phone, carrying their keys in their hands, and checking the backseat of the car before getting in. Because when people speak about their rape, such as Kesha and Lady Gaga, they are called liars. Because there are women who are physically mutilated, such as breast ironing, so try and protect themselves from being raped. Because rapists are innocent until proven guilty, but rape victims are liars until proven truthful.

Because men have no answers to the question of “What do you do to avoid getting assaulted?”, but women have an endless list of answers to the same question. We see keys as a potential weapon, we never set our drinks down at parties, and we avoid eye contact when walking down the street. Because the “pretty girls” are taught to expect to be assaulted, but “ugly girls” are taught to be grateful for the attention when it happens to them. Because I do not know a single woman who has not been groped, assaulted, and/or pressured into sex by a man. 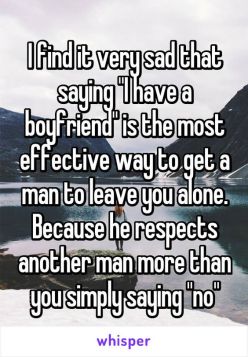 Because men are constantly telling women what they should do with their bodies. Because there are so many people that want to force women to carry an unwanted pregnancy to term, but no one wants to force men to take care of the baby they put inside that woman. Because people honestly believe that making abortions illegal is going to stop women from having them; it will just make them more dangerous. Because people don’t understand that people have different beliefs about when life begins. Because women are put down for aborting a cluster of cells, but no one is put down for not wanting to be an organ donor. Because women are expected to apologize for getting pregnant when their partner doesn’t want a baby. Because no one should be forced into a life they don’t want.

Because it never crossed my mind as a kid that I should look like Barbie. That Barbie has had countless male dominated careers, and has the slogan “Be who you want to be,” but all anyone can talk about is her body. Because we make girls feel guilty for liking dresses, pink, and glitter.

Because images like this are all over social media, but there aren’t any of men. Because we forget that these images are of a real person with feelings. Because we are taught that the worst thing a woman can be is fat. Because men are most concerned about meeting someone fat online, but women are most concerned about meeting a rapist or a murderer. Because fat is used as a synonym for ugly. Because when a woman describes herself as fat, she is automatically degrading herself, instead of describing herself as she would be if she said she was short. Because a woman can be fat and beautiful at the same time.

Because males can buy their contraceptives anywhere and have no judgement for it, but women need a prescription and a “reason” for wanting them. Because everyone talks about how using birth control is immoral, but no one makes that argument about condoms. Because tampons and pads are taxed as luxuries and not necessities. Because it is a women’s fault if her contraceptive fails, but not the men’s fault when his does. Because I should be able to be on birth control if I want without having to get permission from my doctor to be on it.

One thought on “Why We Need Feminism”