As I do most Wednesdays, I had rugby practice this morning. We picked teams for some “flag rugby”, and I was, of course, picked last (which I took much better than last time now that my hormones have been stabilized), however I happened to score three or four tries (I don’t exactly remember I was just happy to make one). I’m not usually one to gloat, especially when sports are involved, however I have to admit that it felt amazing. It was nice to finally show both teams that I’m not the awful player they all seem to believe I am. I know I have my faults, and I know the list is a mile long when it comes to rugby alone, however it is my belief that no one needs their faults and shortcomings spelt out for them, because we are all aware of our own. Rugby is no different- I am aware that I am very far from being the best player on my team. I don’t think I could even be classified as a good player, however I show up to practice whenever I can, and give it my all. I work as hard as I can, and play the best game that I am possible of playing. It saddens me that even though I put my whole heart into the game, my team as well as the boys’ team doesn’t seem to believe in me (even though they all say they do, they never show it). It hurts to see my team looking down on me, like I’m not good enough to be a part of the team. I’m sure this is not their intent, however that doesn’t make me feel any better when I walk away form practice or a game at the end of the day. Usually they get under my skin to the point where I start doubting myself, which, of course, affects how I play. As far as this morning goes, it was nice to not let them get to me, and actually accomplish something during our little morning game. I felt like I was actually worthy enough to be playing with my teammates. For the first time, I felt like I was out of my head and just playing the game I fell in love with. I’m hoping that after today, I won’t be seen as the liability that no one wants on their team, and maybe just maybe, next time I won’t be picked last for once.

Remember people, you are worthy. Don’t let people take your self-worth away, because you know what you are capable of. Just because others don’t see your inner beauty, doesn’t mean it doesn’t exist. YOU ARE WORTHY. Keep being your perfectly imperfect selves. 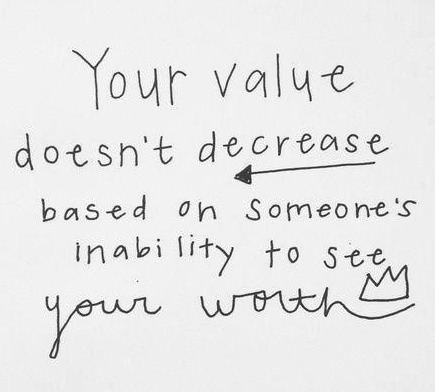